A homeless man was slashed in the face during a fight with a woman at a Times Square...
Read more

Panthers running back Christian McCaffrey will miss the remainder of the season after suffering an ankle injury in...
Read more

You can add colorful animations to your iPhone texts using secret codes that few people know about. All you...
Read more 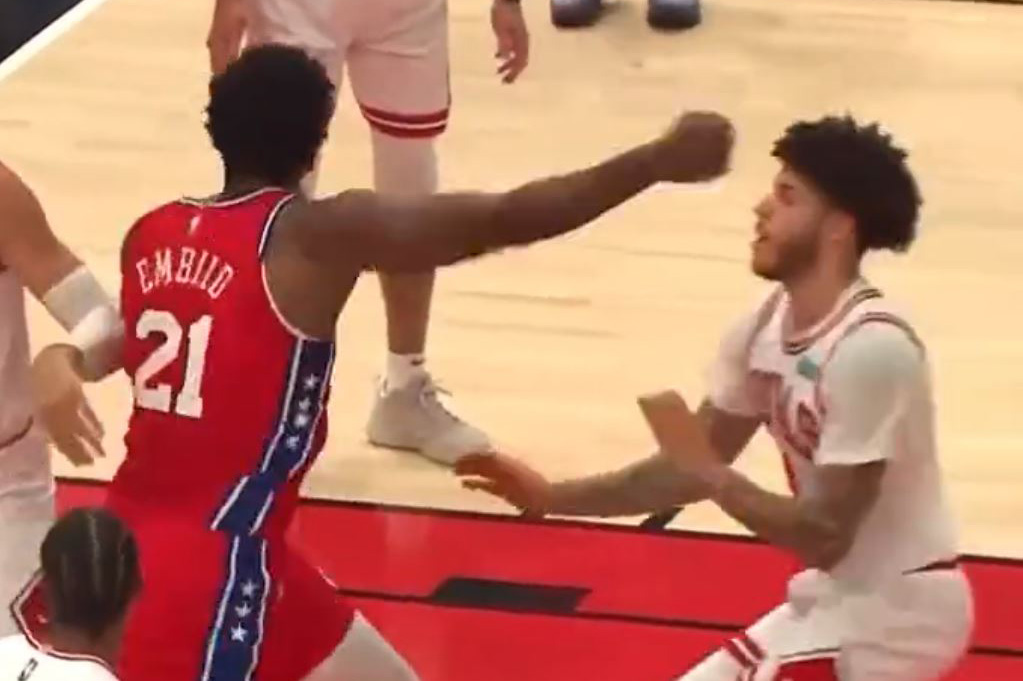 They say it’s a game of inches. But they probably weren’t thinking of it in these terms.

Joel Embiid nearly cold-cocked Lonzo Ball during the 76ers-Bulls game on Saturday night. Frustrated after losing the ball out of bounds, Embiid swung his fist. Ball’s head happened to be in its path.

Thankfully, Ball ducked out of the way just in time. But Embiid was a few millimeters away from creating an unfortunate incident.

Embiid got a technical foul, and Ball seemed to immediately forgive him, giving Embiid a hug shortly after the incident. The Sixers went on to win the game, 114-105, with Embiid scoring 30 points with 15 rebounds and Doc Rivers earning his 1,000th career win.

So, it’s all water under the bridge. Still, it was an exceedingly close call for an incident that would have dominated headlines and undoubtedly gotten Embiid suspended.

Maybe next time, it’s still worth finding a different way to get the frustration out.

Ball struggled in the game, scoring eight points with five assists on 3-for-9 shooting. Zach LaVine and DeMar DeRozan kept the Bulls afloat with 32 and 25 points, respectively, but that wasn’t enough to overcome the Sixers, who moved to 8-2 with the win.

A homeless man was slashed in the face during a fight with a woman at a Times Square...
Read more
Sports

Trooper fires round on RFK Bridge after driver hits him

Panthers running back Christian McCaffrey will miss the remainder of the season after suffering an ankle injury in Sunday’s loss to the Dolphins,...
Read more

Conference play this college basketball season begins on Sunday as Stanford goes to Boulder to face Colorado, which has scored at least 87...
Read more

Islanders games postponed through Nov. 30 due to COVID-19

The NHL has postponed Islanders games through Tuesday, the league announced Saturday. The Islanders have “up to eight” players in COVID-19 protocol, the team...
Read more

Josh Allen’s girlfriend spent Thanksgiving cheering on the Bills quarterback, who led Buffalo to a 31-6 win over the Saints. Brittany Williams, a...
Read more
- Advertisement -